Interactions with Strangers:  Finn is great with strangers who know how to interact with dogs.  He generally wants to be everyone's friend. However, Finn can be reactive to strangers who show "dog" aggressive behavior (i.e. prolonged direct eye contact particularly if directly in his face). Finn is great with older children, and young children (6+) who have been raised around dogs.  Finn has not interacted with younger children much and shows some reservations about small children (toddlers).  Finn does become irritated if "on display" with lots of people wanting to touch and pet him, and stare into his eyes.  This is not an issue at dog shows, but becomes grumpy if he has to meet many, many new people.
Interactions with other dogs (familiar and new):  Finn is the "top dog" in our household. He exhibits dominant behavior towards the female EB who is also dominant.  Finn has no issues with submissive dogs. Finn was very welcoming and gentle when we introduced an eight-week-old male puppy when he was about 1.5 years old. A year later, the two are best friends and Finn's corrections are age appropriate.
Interactions with non-canine pets or familiar livestock:  Finn has no interactions with cats.  He does show interest on walks.  Finn has met donkeys and miniature horses and is friendly.  He does not have a lot of interactions with livestock.

Other information:  Finn had a somewhat difficult adolescence, as may be common with male Otterhounds.  He did challenge us and required a strong personality to keep him in check.  He is mellowing out at age 2.5. He is quite versatile and enjoys a variety of dog sports with the family.
A little story about this dog from his owner:  Finn is my best dog ever. We trained a lot of tricks his first year. But the real tricks are the practical ones. Dan and I had bought a rooftop tent for a planned camping trip in Colorado.  Dan and Finn were going to drive to Colorado, and I was going to fly in and meet them. I spent days searching YouTube for how to get a “big” or “large breed” dog in and out of a rooftop tent.  Well, evidently “big” and “large breed” means something different to people without Otterhounds. Everyone I found who camped with their dog in an RTT helped their “large” (60 compact lb) dogs climb the ladder. Well, I could just imagine all the ways I could get hurt teaching Finn to climb an 8 ft ladder. So, about 10 days before we left, we devised a plan, and we were going to practice it every day until departure: Finn was going to jump onto a small table next to the Pilot, then jump onto the hood of the Pilot, then scramble up the front window, and through the rooftop tent window. Well, less than10 minutes, some bait, and a couple of strategically placed yoga mats (for grip) later and Finn was in the tent. He was a little more skeptical about getting out, but again, bait. That was it; the next day he just did it. And the same on the third.  And then we stopped practicing. He’s the smartest dog I’ve ever owned—no trick has taken longer than 5 minutes to teach.  And he’ll do anything I ask, anytime I ask, every time I ask… as long as there’s a tasty treat at the end. He’s such a ridiculous boy. He makes sure me, and the house are never too clean—he won’t have us putting on airs. Finn loves to do anything as long as it’s with us.  He’ll fish, or hike, or learn new tricks, and track all day. He’ll even retrieve a bumper or two if he thinks his little brother is getting too tired with all that hard work.  But mostly he’s a ‘yard’ potato; And he loves to sleep in late with me.  Hanging around the house, he isn’t too concerned with us, unless another dog thinks they might get our lap.  But the best time is bedtime… the five minutes between when I go to bed and dad lays down.  Finn hops up on the bed waiting for me to climb in.  Then he lays down on top of me and stretches his neck out and turns his head up-side-down on top of me to get a couple neck scratches and snuggles before sleep. Once dad comes to bed, he falls asleep between us. And then, like clockwork, about 10 minutes later, he gets tired of us taking up too much room or daring to move and disturb his beauty sleep; He’s had enough and jumps off the bed to the floor next to me, stretches out, and goes to sleep. Every night. Without fail. 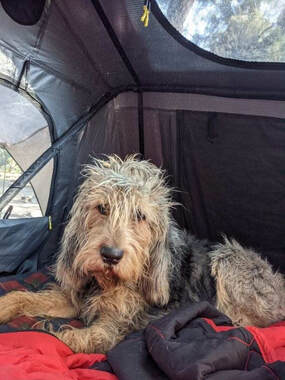